Born in the UK, in the Summer of Love 1967. Started playing guitar, aged 15. Graduated with a BA in Advertising from Glasgow University. Played obtuse guitar with several unknown Gothic Rock bands. Postgraduate study PgDip, in Industrial Design from Humberside University. Didn’t play guitar for 15 years, working for ‘The Man’, earning money to pay bills. Lived in Taiwan for 4 years. Picked up the old guitar again when my son became a teenager. Now combining work experience in design with love of guitar form, shapes and sounds. Writing and blogging on GuitarDesignReviews from time to time. Working to create some future classic guitar designs.

Please contact me on the form below about anything to do with this site and guitar designs.

Kerry Kruger is an American, living in Miami, where he has been a letterer, illustrator, sign and logo designer  and fabricator, ad layout artist, pinstriper, cartoonist, airbrush artist, copywriter, editor, occasional voice-over dude, guitar set-up guy, and more, for nearly thirty years. He has a BS in Broadcasting Production and an AA in Fine Arts from the University of Florida. (Proceed, Reptilians!) 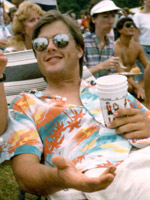 Because of these and other job-hats, his guitar design career sat on a back-burner for a very long time and confused many. Miami being too humid to build guitars well, he’s concentrated on solid-body designs, as they require less ‘acoustic’ complexity and general fussiness. As of this printing 5/2011, he has designed 204 new guitar models. That almost no one has seen.  Or missed, apparently. So he’s learned a lot of hard lessons, bourne on the wings of outright folly and blind experimentation, at no apparent return.

Two of his models have been made with two now-extinct small companies, so the leap into Luthiery has been somewhat… frustrating.  At any rate he has not yet given up, and continues with this absurd mania. He can’t even play very well. It’s crazy. Yet, witty, handsome, and charming, he’ll tell you the truth, and damn the consequences. The important thing to remember is, never to allow him to write his own blurbs.

Comments or questions are welcome.

This site uses Akismet to reduce spam. Learn how your comment data is processed.